Chemical food dyes are added to many foods to improve their color or give them a vibrant appearance. These synthetic food dyes are made from petroleum and are a complex mixture of chemicals. It’s not just sugary cereals and candies such as Lucky Charms, Trix, and Skittles that have food dyes. Artificial food colors are found in many products such as sodas, breakfast cereals, candies, processed foods, and baked goods.

Many people are concerned about the potential dangers of food coloring in our food. Some studies have linked artificial food dyes to hyperactivity in children, allergies and possibly cancer. There is also concern that food dyes made from chemicals could have other potentially harmful side effects.

In this article, you will learn about scientific research into the potential danger of artificial food dyes. At the end of the article, you will find out which popular products have chemical food coloring lurking in them.

What are Food Dyes and What are They Made Of?

Synthetic food dyes are made from petroleum and are a complex mixture of chemicals. Research published by the “Center for Science in the Public Interest” said that food dyes may also contain many impurities. For example, Yellow 5 could contain up to 13% of organic and inorganic compounds.

In order to create the right color for food, various artificial food dyes are combined to help color food and make it more attractive.

According to the U.S. Food and Drug Administration (FDA), artificial food colors must be tested and certified before being used in foods and drinks.

Since 1955, there has been a 5-fold increase in the number of foods that are colored by dyes. Artificial food coloring is found in snacks, baked goods, frozen desserts, pickles, salad dressing, candies, and breakfast cereals.

If the production of artificial food dyes is strictly regulated, are there really dangers associated with food colors?

There is much debate on the side effects of food dyes and their potential risk to your health. On the one hand, artificial food dyes used in food processing go through rigorous testing for toxicity. The FDA and other regulatory bodies say that the food colors are safe for consumption within the recommended levels.

However, some research has shown that synthetic food dyes may contain cancer-causing chemicals. Some carcinogens in artificial food dyes include 4-aminobiphenyl, 4-aminoazobenzene, and benzidine.

The FDA says that testing means that potentially dangerous cancer-causing chemicals in food colorings are kept to safe levels. However, what is worrying is that there has been an increase in consuming foods that contain synthetic food dyes. Since 1990, when levels of dyes were established, there had been a 50% rise in food consumption that includes artificial chemical colorings.

So, there is concern that adults and children are consuming more artificial colors than before. This could mean that it is possible to consume more than the recommended amount of food dyes.

There may also be dangers associated with a mixture of food coloring chemicals in food. For example, one scientific study found that a combination of Red 40, Yellow 4, Yellow 5, Red 2, brilliant blue, or tartrazine can negatively affect the central nervous system. However, few studies have been carried out on the synergizing effect of mixing artificial food dyes.

The “Center for Science in the Public Interest” raises other concerns about the potential dangers of artificial food dyes. Studies on the effects of synthetic food coloring done on rats generally have not been long enough to see what the long-term consequences of consuming food colors could be.

Popular  What Is Periodontitis? Causes, Symptoms, And Treatment

Another reason why it can be confusing to know if food coloring is bad for you is that some food dyes are banned in some countries but not in others. For example, McDonald’s use Red 40 to color their strawberry sundaes in the U.S. but in the United Kingdom, only strawberry extracts are used. (3)

Let’s look at the link between artificial colors and these 3 conditions in more detail.

One of the reasons why many people claim that food coloring is bad for you is due to a link to cancer. A 2012 review on the danger of food dyes in food found that certain colorings approved for use in the U.S. are contaminated with carcinogens. Red 40, Yellow 5, and Yellow 6 were found to contain benzidine which is a known cancer-causing compound.

The scientists who conducted the study recommended that all food dyes be removed from the market as they provide no nutritional value. Research from 1999 found that tartrazine and Sunset Yellow FCF (Yellow 6) can also be contaminated with benzidine. One study involving hamsters found that Blue 2, Green 2024, and Red 4 increased the incidences of tumors in animals.

Red 40 and the cancer link

Red 40 is among some of the most common artificial food dyes used in food processing. The journal Toxicology reported that Red dye No. 40 showed toxicity when given to rats.

Other studies have shown that the food color Red 40 can contain p-Cresidine which is another potential carcinogen. Red 40 food dye has also been linked to other health concerns such as hyperactivity in children.

Another food dye that contains potential cancer-causing contaminants is Yellow 6, or Sunset Yellow. Tests on the effects of synthetic Yellow 6 have found that it may be contaminated with 4-aminobiphenyl and benzidine. These compounds have been shown to increase the incidences of adrenal and testicular tumors.

The journal Toxicology reported that sunset yellow has an estrogen-like effect in the body. Researchers have found that exposure to these types of compounds can increase the risk of primary biliary cirrhosis and breast cancer.

Animal studies have shown that the food dye Red 3 may affect thyroid function and increase the risk of breast cancer. One study found that Red 3 has an estrogen-like activity in the body. This could be a risk factor in the development of human breast cancer.

Studies on rats found that Red 3 and Red 105 increased the risk of thyroid cancer.

Brilliant Blue (also called FD&C Blue 1) can affect the stability of cell development and how the body reacts to inflammation. One 2016 study found that FD&C Blue 1 has a potential risk in the development of cancer and affect the nervous system. However, more research needs to be carried out.

Blue 2 food additive is found in candies, colored sodas, and other foods. Some reports indicate that Blue 2 increases brain gliomas and breast tumors in rats. More research needs to be done; however, the researchers recommended that Blue 2 be removed from the list of approved food additives due to safety concerns.

Food Dyes May Cause Hyperactivity

One of the claims why food dyes are bad for children is that they can cause hyperactivity.

Another trial found that Yellow 5 (tartrazine) creates a dose-dependent negative effect on behavior. Even 1 mg of Yellow 5 food dye was enough to cause restlessness, irritability, and disrupted sleep in children aged 2-14 years.

Popular  10 Great Reasons Why You Should Drink One Beer Daily

Studies over a period of 35 years have found growing evidence that synthetic food colors negatively affect the behavior of children whether they have ADHD or not.

Consuming food and beverages containing synthetic food dyes may be bad for you because they can cause allergic reactions.

A report from 2015 found that artificial food dyes made from petroleum may be linked to an increase in allergic and immune reactive disorders. For example, the tiny molecules in synthetic dyes can disrupt the immune system and bind to body proteins. This can result in autoimmune reactions and other health problems in children and young adults.

One study found that azo dyes (food colors derived from petroleum) can result in allergic vascular purpura. This condition results in large skin rashes with red or purple blotches. Eliminating artificial additives from the diet resulted in an improvement of the condition.

Artificial food dyes may also cause you to develop itchy red rashes on your body. Researchers have found that removing foods containing artificial dyes can help to lower the frequency of these allergic skin reactions.

Should You Stop Consuming Foods with Artificial Dyes Added?

Of course, some agencies play down the risk to your health that food dyes pose. However, it is good to remember that, in the past, certain food dyes that were deemed safe were later banned due to toxicology issues.

For example, a review on the history of food coloring and its regulation reported that health concerns have led to some food dyes being de-listed. For example, Orange 1, Orange 2, and Red 32 were certified as harmless in 1935. Subsequent research found that these coal-tar food dyes were causing children to become sick.

In the U.S., laws require that certain artificial colors are listed on the list of ingredients. For example, on a box of Lucky Charms, you will see Yellows 5 & 6, Red 40, and Blue 1 on the ingredients list. The cereal classic Trix has Red 40, Yellow 6, and Blue 1 as well as “other color added.”

In other countries, government laws require that warnings about synthetic food colorings are on the packaging. This has led many multinational companies to remove all artificial food dyes from their products.

It is good to remember that artificial food dyes provide no nutritional value. They are chemicals produced from petroleum products that have been linked to hyperactivity in children and may be contaminated with cancer-causing compounds.

If you want to avoid buying foods that contain artificial food dyes, which are the ones you should avoid?

According to the “Center for Science in the Public Interest”, Yellow 6, Blue 1, and Red 40 are found in Fruity Cheerios, Trix cereals, Lucky Charms, and Cap’n Crunch’s Crunch Berries.

It is also good to remember that apart from containing potentially-harmful colorings, many breakfast cereals marketed for children are laden with sugar. Another breakfast-time favorite is Kellogg’s Hot Fudge Sundae Pop Tarts that contain a collection of yellow, blue, and red dyes.

You may be surprised to find out just how many artificial colorings are found in sugary sodas and beverages.

For example, Kool-Aid Burst Cherry has 52.3 mg of artificial dyes per serving. Other beverages that contain artificial dyes that can cause hyperactivity include Powerade Orange Sports Drink, Crush Orange, and Sunny D Orange Strawberry.

How to Avoid the Dangers of Food Colorings

The best way to avoid any of the side effects of consuming foods containing food dyes is to carefully check package labeling. Some of the most common artificial food dyes used in the food and drinks industry are Red 40, Yellow 5, Yellow 6, Blue 1, and Blue 2.

You can also look for healthier alternatives that contain natural food coloring. For example, beet powder, paprika, turmeric, beta-carotene, and annatto extract are all used to give food and drink a natural vibrant color.

Interestingly, some multinationals such as Mars, Kraft, McDonald’s, and PepsiCo use natural colorings in products they produce for Europe whereas the same ones in the U.S. contain chemical colorings.

Also, choosing whole foods rather than pre-prepared, processed food will not only help minimize your exposure to food dyes but will also be nutritiously better for you. 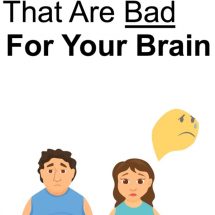 Health Experts Reveal 8 Foods That Are Bad For Your Brain 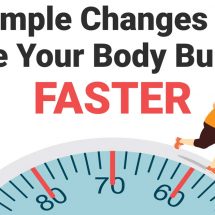 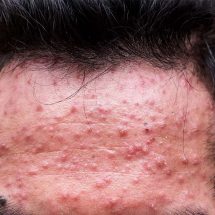 Zinc For Acne : Does It Work?