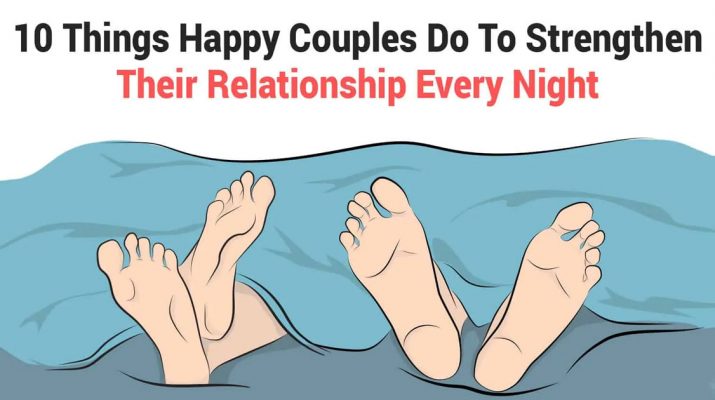 Falling in love is easy, but relationships take work. Most people and couples can agree with that statement. There isn’t any set formula to determine if a relationship will last or if a person you are in love with is “the one” to spend the rest of your life with. While there are certain traits happy couples have, there are also certain rituals couples do to keep that happiness.

Here are 10 things happy couples do to strengthen their relationship every night.

Traits Of A Happy Couple

A survey done by E-Harmony in 2019 states that 83% of American couples are happy together. The survey also noted that the happiest couples were ones who were very similar to each other. These are the same traits they shared:

Other studies share some of these traits and also show some changes over the years.
According to a 2007 Pew Research study, the factors that make a marriage work included:

What was interesting was when the 2007 poll was compared to a study in 1990; certain elements showed a definite shift.

Traits That Can Destroy A Relationship

On the opposite end of the spectrum, some traits identified could end even the best of relationships. In an article in PsyBlog, Professor John Gottman is credited with isolating those very traits from his 40 years of analyzing all types of relationships.

Per the article, he has isolated 4 distinct behaviors:

Repeated criticism points at the other person as if they somehow are “less than” or flawed in some manner. The type of criticism he is speaking of is one that isolates a personal trait of an individual, as opposed to pointing out a habit that could use some change.

For example: Telling a person, “You’re always on your phone, so you’re never there to listen to me.” There may be a legitimate complaint in that one person should put down the phone when another is trying to communicate. That doesn’t necessarily point to them not ever being emotionally available for the other.

Contempt can be shown in a variety of manners. By mocking the other person’s interests, calling them insulting names, mimicking them, being overly sarcastic, or discounting their opinion or expression of emotions. Professor Gottman reportedly stated that this one trait almost always led to divorce.

Being defensive often is a sign of not taking responsibility and making excuses for mistakes. It is viewed even worse if that defensiveness includes pointing out the other person’s mistakes without owning your own. A relationship requires teamwork, cooperation, and partnership. If one party is excusing their behavior while pointing fingers at the other, there is no togetherness in making things work.

4. Stonewalling Or The Silent Treatment.

Once communication or any form of acknowledgment of the other person ceases, the relationship is at a standstill and pretty much over. Communication and the desire to connect is the foundation of a relationship. Without it, there cannot be any moving forward.
10 things happy couples do to strengthen their relationship

Happy Couples Do These 10 Things To Strengthen The Relationship

As stated above, connection and communication are essential to maintaining a relationship. We all get busy in life between jobs, errands, cleaning, children, health issues, and other responsibilities. It can be easy to slip into your own world and lose touch with each other. This is one area that couples agree requires work to keep that connection, appreciation, and love shown to each other. Making the commitment to do certain things each night to strengthen their relationship is one way to ensure each other’s hearts are still touched.

1. Reliving A Funny Event That They Shared In The Past.

A study in 2006 showed that couples who reminisced about a past situation, which was funny, showed higher relationship satisfaction that went beyond just mood enhancement from laughter. Within the study, previous studies are listed demonstrating that couples who laugh together and where each party demonstrated humor in the day, was among the top 3 reasons why they were satisfied in their marriage.

Usually, people have things they do before they get into bed, such as brush their teeth, put out their clothes for the morning, take a shower, shave, and wash off makeup. Happy couples will choose to do one or two of these at the same time as the other is doing their thing. Think of the cartoon where the man is sitting on the toilet, and the woman is brushing her teeth. These little self-care rituals that people do become more intimate when shared with a partner.

Sometimes couples don’t have the time to share much about each other’s day until bedtime. There may be children to take care of, dinner to make, laundry to do, or other commitments. Making a sincere effort to reach out to your partner and both share about your day can help relieve stress as well as make their work world not seem so far away.

4. Keep Arguments Or Heated Discussions Out Of The Bedroom.

The bedroom should be your sanctuary away from everyday life, a place you both know you can come together and just be with each other. Not only should arguments be resolved before going to bed, but they should be resolved outside of the bedroom in order to keep it a safe place to be together.

5. Do Something Simple That Shows Thoughtfulness For The Other Person.

It genuinely is the little things in life that can show someone that they are special, important, and loved. Prepping the coffee pot, making lunch for the next day’s work, filling the humidifier, putting out the toothbrush or shaving gear, or running a hot bath. Choosing something that will make the other party’s life just a teensy bit easier shows a lot of care.

Regardless of if sex is happening that night, physical touch is essential to keeping intimacy and love alive. It is the one non-verbal cue of connecting to the other person.

Depending upon your partner’s work schedule, they may not be able to share in putting the children down to sleep. They also may only be home on time on certain nights. Giving the other partner a break to allow them to do something for themselves demonstrates both compassion, understanding, and sharing in the responsibility.

When one partner is already asleep by the time the other is able to get to bed, a sweet forehead kiss is cherished. It demonstrates deep caring, affection, and a desire to connect.

If you and your partner don’t share the same bedtime or maybe just to surprise them, write a little loving or encouraging note. Show that you see how they are working, how much you appreciate them, wish them good luck before a big meeting the next day, etc.

Everyone needs to hear they are appreciated, are doing a good job, look attractive, were supportive, or something positive about their day. Give compliments freely.

Relationships may be hard work, but that doesn’t mean that they can’t also include humor, positivity, support, love, affection, intimacy, connection, and so much more. There are many different ways to show your partner all of those things. Developing a ritual is a great way to ensure you make the time so that time doesn’t slip by. Just because it’s a ritual, doesn’t mean it always has to be the same.

Consistency can show reliability and dependability, but it can also become meaningless. Do a few little things differently every once in a while to keep things from getting stale. These 10 things happy couples do to strengthen their relationship every night might give you some ideas too! 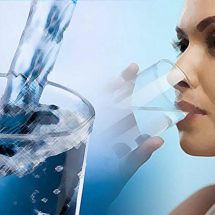 Drink Only Water and These 8 Things Will Happen 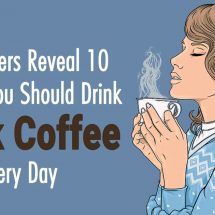 Researchers Reveal 10 Reasons You Should Drink Black Coffee Every Day 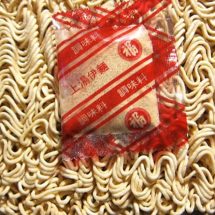 Instant Noodles Are Linked to Stroke, Diabetes, Weight Gain, and Even Cancer